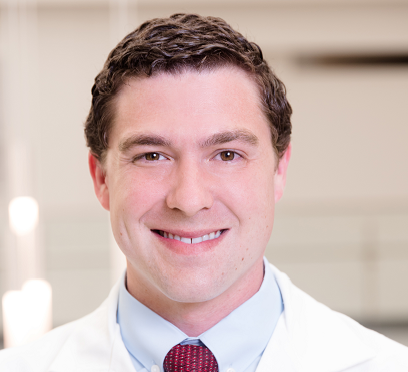 Dr. Matthew Davis graduated with High Honors in Neuroscience from Dartmouth College and holds an M.D. from the University of Michigan, where he was awarded the highly selective Dean’s Full Tuition Merit Scholarship.

He performed his neurosurgical training at the University of Alabama-Birmingham, where he additionally obtained a Masters of Public Health in Health Care Organization and Policy. He completed a CAST-approved fellowship in Functional and Stereotactic Neurosurgery, with an emphasis on epilepsy surgery and deep brain stimulation for movement disorders.  He is a board eligible neurosurgeon and is licensed in both Florida and Alabama.

Growing up in Bend, Oregon, Dr. Davis developed a life-long passion for the outdoors, enjoying competitive running, skiing, and biking. At Dartmouth College he was a 4-year Division I varsity athlete in Cross Country, Indoor Track and Outdoor Track, achieving Academic All American, All Northeast Region, and All New England status. He was deeply involved in the development of MEDLIFE, a medical school and university-based program providing medical care to low-resource patients in several Latin American countries. After college, he worked full-time conducting electrophysiology patch clamping experiments on the effects of androgenic steroids on GABAergic transmission.

During his neurosurgical training, Dr. Davis received numerous awards, including the Resident Education award in 2015, the Kaul Foundation Clinical Research Scholar award in 2016, the Resident Academic Achievement award in 2018, and the Award for Resident Leadership in 2019.  He is involved in organized neurosurgery and served as a Council of State Neurological Surgeons Socioeconomic Fellow in 2017.

Dr. Davis has authored over 50 peer-reviewed publications and book chapters, and has presented at dozens of national and international scientific meetings. He has a passion for quality improvement and innovative technologies. Dr. Davis has implemented system-based means for improving care, using telecollaboration tools for international neurosurgical assistance. This work formed the basis for multiple projects in adapting technology to expand neurosurgical capacity both within the United States and worldwide, leading to collaborations with neurosurgeons in Vietnam, Myanmar, Guatemala, Ghana, and Kenya.

Dr. Davis is the proud father of Benjamin Davis, who has a rare genetic mutation in the ADNP gene. He serves as the Chairman of the Scientific Advisory Board for the ADNP Kids Research Foundation, and holds a provisional patent for the use of novel therapeutics for the disease.
In addition to general cranial neurosurgery and spine surgery, Dr. Davis provides subspecialized care in Functional neurosurgery and epilepsy surgery. Dr. Davis performs many neurosurgical procedures including: